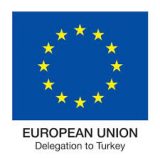 Delegation of the European Union to Turkey

As a diplomatic mission, the Delegation of the European Union to Turkey operates under the terms of the Vienna Convention on Diplomatic Relations and is managed by a Head of Delegation who is accredited to the President of the Republic of Turkey with the rank of ambassador. The Delegation has a staff of some 130 agents.

The Delegation maintains close contacts and coordinates its work with the embassies of the member states of the EU accredited to Turkey.

The Delegation also maintains a wide range of contacts with public authorities, political parties, business circles, academia and think tanks, civil society organisations and cultural operators. In addition, it implements a comprehensive information and communication programme aimed at fostering the visibility and understanding of the European Union, its values and its activities in Turkey.