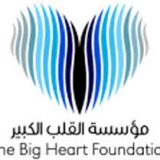 he Big Heart Foundation was established in May 2015 by Her Highness Sheikha Jawaher bint Mohammad Al Qasimi, wife of His Highness Dr Sheikh Sultan bin Muhammad Al Qasimi, Member of the UAE Supreme Council and Ruler of Sharjah.

The organisation was set up to convene the wide-reaching humanitarian efforts based in the United Arab Emirates (UAE) with the aim of helping children and their families in vulnerable situations outside of the UAE. The Big Heart Foundation’s mission is to work wherever support is most needed and has actioned change in many countries, including Lebanon, Palestine, Jordan, Iraq and Syria, among others.

Originally set up as a fundraising campaign in June 2013, The Big Heart Foundation was developed into a full-fledged foundation, in 2015, to act as an umbrella organisation for overseeing the extensive international humanitarian support under the patronage of HH Sheikha Jawaher Al Qasimi.